Home/RTCL Member Spotlight/Running to calm the storm: How this runner discovered her release
Previous Next

Running to calm the storm: How this runner discovered her release

Amy Sanchez never planned to become a runner. She just started working out at the gym to better understand the physical therapy her son was going through. Ivan, her son, was born with quadriplegic cerebral palsy and needed therapy from a young age. Amy wanted to be able to relate to his experience.

“It would put me out of my comfort zone and feel the challenges he feels,” she says. So Amy hired a personal trainer. She remembers the trainer asking her to warm up for seven minutes on the treadmill and she thought, “That’s a whole workout.” 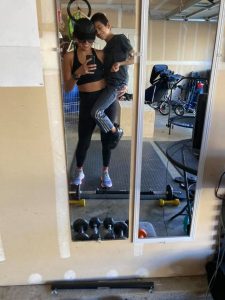 She did that for a few months, but then her life took a turn.

Shortly before the birth of her second child, a daughter, Amy’s children’s father started to distance himself from the family. Amy found herself taking on full parenting responsibilities, which were much more complicated given the fact that her son needed a lot of her attention.

These challenges also stoked Amy’s old insecurities and fears. A twin, Amy says she never felt like she could compare to her sister. She always felt like she wasn’t good enough. Stretched to her limit with parenting while going through a separation made her feel those anxieties appear again.

Though she sought help through therapy and medication, Amy found herself always on the edge of snapping. She felt like no one understood the challenges she was facing. No one could provide her the help or support she needed. Anger bubbled close to the surface.

Even finding time to go to the gym was harder as a single parent, needing to provide full-time care to Ivan and her young daughter. “I just wanted to give up,” Amy says, but she had to push through.

The breaking point was when Ivan’s doctors recommended surgery for his dystonia, a movement disorder that makes muscles contract involuntarily, causing repetitive and abnormal movements. The surgery to address Ivan’s condition would involve drilling into his brain and performing deep brain stimulation. 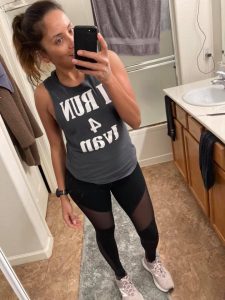 “That’s when running came into my life,” Amy says, as Ivan underwent procedures to determine if he was a good candidate for the surgery. In the midst of the series of tests and uncertainties, Amy says, “Just one day I said, ‘I think I’m going to go for a run.’”

Amy admits that part of her desire to run was a feeling of wanting to run away. “The doctors and movement specialists were telling me my son wouldn’t progress, and I wanted to know why not? Why couldn’t he just be okay?”

These thoughts and frustrations were driven mostly by Amy’s frustration with herself and feeling like she couldn’t be a good mother to her children, she couldn’t give them what they needed. It was the voice of anxiety, but it took a significant toll on her self-esteem.

But she also saw Ivan overcoming incredible hardships to make remarkable progress. Though he couldn’t speak, he learned sign language to communicate with Amy. And though he has physical limitations, Ivan’s cognitive abilities are not affected by his cerebral palsy. He’s found ways–like typing with his nose–to keep pace with other kids his age in school.

Given this, Amy was faced with a decision: should they do the surgery or not? After a series of tests, the doctors recommended it, but Amy felt overwhelmed. The decision spiked her anxiety.

She turned to running.

Her family left the hospital, and while Amy’s parents watched her kids, Amy went for a run on the Golden Gate Bridge. “I came back and I felt so much better. I just felt free,” Amy says. She decided against the surgery for her son.

This was a pivotal moment. It showed Amy that when she felt stressed, overwhelmed, and anxious, she could go for a run. “The more I pushed myself, the calmer I felt.” 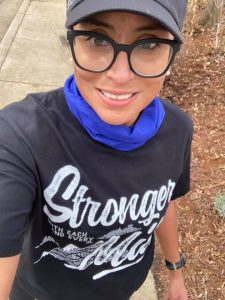 She started incorporating running regularly into her routine, even before stressful situations so that she could better manage her anger or anxiety in those moments.

Progressively, Amy increased the distance of her runs, and as it became more a part of her life, she was able to stop taking antidepressants. She says she found a better way to cope with her life.

Amy had also found a new, healthy relationship, and got engaged at the end of 2019.

The improvements in her life led Amy to set a big goal. At the beginning of 2020, she told her son that she was going to run a full marathon that year. Then, her fiance was deployed overseas and COVID hit. Parenting on her own again, and having her children do school from home meant that Amy became a full-time aid to her son, both with his school work and physical therapy. She was overwhelmed again, especially as she struggled to find time to run.

“I would try to run for half an hour, but it wasn’t enough and it wasn’t consistent,” she says–not to mention that it wouldn’t get her into shape to run a marathon.

When she was able to get help for her son, Amy was able to get back to running, and she found she wanted to keep pushing herself farther and farther on each run. She was able to complete a full marathon on December 27, 2020, around her neighborhood.

That’s when her running journey shifted–she stopped running just to run and started getting serious about her training and goals. Amy also got a jogging stroller to push Ivan on her runs while her daughter bikes with them. 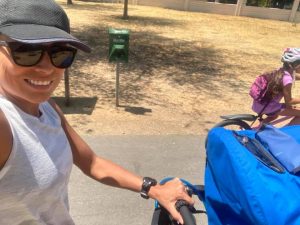 Amy is hoping to run an official half-marathon and a full marathon–she’s never run an organized race. She also plans to run 1,000 miles by the end of the year, which includes a goal of running 100 miles for at least three months.

Running has given Amy so much and will continue to improve her life. “What a great feeling to know that I can take care of my kids, take care of myself, and be happy.”