“If you want to be a fit person, think like a fit person.” This the advice that Ben Reisinger’s doctor gave him when he asked how to lose weight.

In 2015, Ben had reached 375 pounds. “I wasn’t eating healthy, and I wasn’t taking care of myself for years,” Ben recalls. But in April that year, he was ready to make a change.

Ben had tried running before, going out too hard and too fast. Needless to say, it didn’t stick. This time, he planned to do it differently.

“I remember saying, ‘I’ll just go for a run.’” When running, again, proved too difficult, Ben did something different this time. He started walking. And he kept walking for six to eight months, losing about 70 pounds.

With vastly improved health, Ben decided to try losing more weight through kickboxing, though thoughts of one day running a marathon stuck in his head. Through a nine-month regimen of kickboxing, Ben got his weight down to 205 pounds. He also found his way back to running when a friend at his gym suggested he try to race a 5K.

Ben was able to run a few times a week at this point, but he never kept track of his distance, so the 5K intimidated him. Could he run it?

He was talked into a 5K that took place in November 2016. Not only did he complete the race, but he finished it in 23:52. “I had no idea what that meant,” Ben says, but someone pointed out to him that if he could run that pace with no training, then if he had actual training, he could be good at running.

This idea didn’t take hold for Ben immediately. For a little while after the race, he stuck to his haphazard routine of running when and how long he felt like. He started to test how far he could go. With a similarly relaxed attitude, he jumped from four miles as his longest run to 13. He completed the half-marathon distance in two hours and four minutes–and could barely move for four days after. 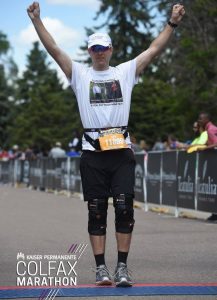 But that was the motivation Ben needed to give his running a serious chance. He wanted to run that marathon he’d planned on, so he turned to the staff at Runner’s Roost to help him figure out how to train.

Ben says his training for a marathon was going well until he reached 16 miles in his training runs and became injured. He endured the race but walked the last 10 miles with IT band pain.

Once again, he had someone tell him, “You have a lot of raw talent but you have no idea what you’re doing.” Fortunately, this came from a coach who also said, “if you follow what I tell you, I can make you into a very fast runner.”

His serious commitment to his training has helped Ben go from a sedentary, 375-pound non-runner to a 170-pound, 1:20 half-marathoner in five years. Though Ben acknowledges that genetics and talent plays a part, he’s a firm believer that a good training plan has really made his accomplishments possible. 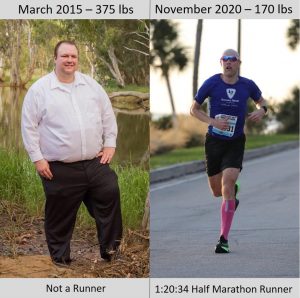 He’s driven to compete, not only with himself for increasingly better times, but also with others. However, Ben believes that the beauty of the sport is that any runner can find their own motivation. “Everybody has different goals and that’s okay.”

“I give props to people who stick with it, I know it’s not easy to be a slower runner, but you’re still a runner and that’s the beauty of our sport,” Ben says. He loves running for the fact that we can participate in the same race as the top runners in the world.

But he’s also quick to add that he runs into a misconception a lot that he’s doing some different than everyone else to run fast times. “We’re all doing the same thing in training and at the start line, whether you’re an elite runner, a professional runner, or an everyday runner.” Ben says this is especially true of the nerves he feels at the start line on race morning. Those are no different than what anyone else experiences.

Ben believes that another universal truth of the sport is that everyone can improve. “I like running because it’s been very linear,” he says. “If you do tempo runs and track workouts, you’re going to get faster.” 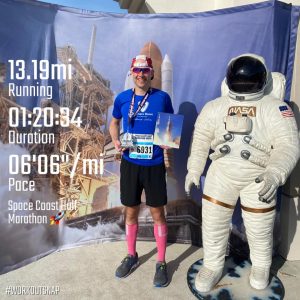 He emphasizes that no matter what, it’s the training that matters. “Genetics will only take you so far; you really have to work at this. Running is the cruelest but also the most rewarding sport.”

And he hopes that his incredible journey with running and weight loss will inspire others. “What I hope to show with my weight loss is that anything is possible,” Ben says. He’s noticed that a lot of people, no matter their circumstance, have a tendency to assume that they are stuck the way they are; they can’t see themselves becoming anything else. But, as Ben points out, athletes aren’t born, they’re made.

Which is why his doctor’s initial piece of advice to, “think like a fit person,” has stuck with Ben all this time, driving him to keep running and to keep the weight off.

He’s not sure about his future goals–especially with the next year of racing still in question–but Ben knows he will continue to get better with effort and time. He knows he wants to compete at a higher level. And he wants to see others get just as much out of running as he has.