How this ultrarunner finds joy in long distances

As a runner, Carol Seppilu can boast several remarkable accomplishments. A native of northwest Alaska, she routinely runs in extreme cold and snow. She completed her first 100-mile race this year–and she did it self-supported. She’s battled with depression for years and found solace in running. But maybe the most important accomplishment is simply that Carol started.

In 2014, Carol recalls her depression was compounded by obesity. She felt like they held her captive. She didn’t want to get out of bed.

But she had a friend who traveled the country to run races and nudged Carol to run with her. “I told her I couldn’t, I was too big,” Carol says, though the thought of running lodged in her head.

When she woke up on a beautiful summer day that year, once again feeling depression’s weight on her, Carol decided that she needed to get out of bed. She needed to run two miles that day.

“I couldn’t run more than a couple of blocks, but I made the decision to walk the rest of the way,” Carol says. That’s also when she vowed to walk every day. It wasn’t long before she was running a mile without stopping and then even further. 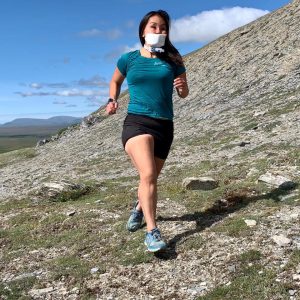 Carol’s running ramped up quickly from there, as she raced an 8-miler, a half marathon, and then a 20-miler. In the midst of the 20-mile race, Carol got the bug to try ultrarunning.

She had gone to the race with the friend who inspired her to run. Carol’s friend was running the 100-mile race, so after Carol finished her 20 miles, she stuck around to watch the other runners and noticed that those going the furthest seemed to be the happiest. She remembers their smiles.

She says, “If they could get joy out of something so difficult, I knew that it was something I wanted to do”

So she discovered a new goal, figuring out how far she could run.

In fact, now Carol says that any race less than 20 hours is too short for her.

She’s drawn to ultrarunning, in part, because it allows her to spend so much time outdoors, which she loves, even when the temperatures in Alaska dip below -30℉. But she also pursues such long distances because they challenge her—perhaps even more so mentally than physically. 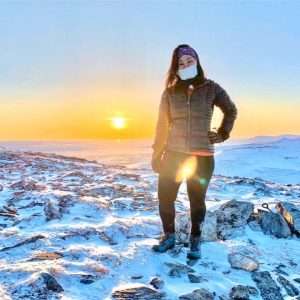 Carol acknowledges that in every ultra, she will hit a very low point, “When you feel like your body is telling you to stop and you’re hurting.” However, she says, “I’m learning how to push myself past that very low point…I’m trying to teach my mind to become really strong.”

And when she gets past that point in any race, Carol says, “I feel complete joy.”

She faced numerous low points in her attempts to cover 100 miles. Her first try was thwarted by more elevation than she had expected; her second by nine inches of snow, which gave her frostbite; the third time, she was injured at the starting line and decided not to push.

But Carol ultimately didn’t need perfect conditions. She finally tackled the distance this year, even though the pandemic meant she had to do the race self-supported. Carol also faced one of her lowest moments in the last ten miles.

She says that at mile 92, “I had an emotional breakdown. I felt like I was hallucinating. I thought I accidentally turned around—for a few miles I didn’t know if I was going the right way. I realized I had a compass on my phone and I could check it.”

Even after she pushed past that, she wasn’t done. At mile 96, there was a black bear in front of her. “It was really scary,” she says. “He jumped into a tree, and I told him I’m going to walk right past you. I have to finish.”

That “I have to finish” mentality is what got Carol started with running, and it’s what keeps her going even in the toughest races and the hardest moments with her mental health. She still struggles with depression, though she says that running helps her cope with it.

“It’s a lot easier to manage now that I’ve been running consistently. I’m more happy than I was before.” And it’s not just that the physical act of running lifts her mood; the brain training that she does to run ultras helps her also in moments of severe depression.

“It gets really bad for me,” Carol is not afraid to admit. “I have these dark moments when I shut myself in the bathroom and just cry.” But she also says, “I try to teach my mind how to get past that. I think about that tough moment after 20 hours, and I tell myself you’re strong, Carol.”

Carol is so open and honest about sharing her struggles because she hopes that it will help others. She has overcome so much to get to where she is today, both with her mental health and running. 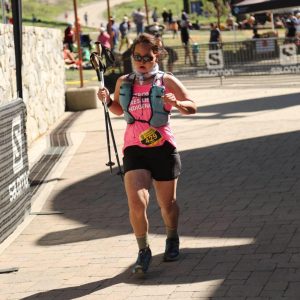 When she was a teenager, her depression became so severe that Carol attempted to take her own life. Recovering from a well that deep has helped give her the courage to live, but it also left her with physical and emotional scars.

She cannot breathe out of her nose and uses a tracheal tube instead. It makes running feel harder, but it also makes running possible for Carol.

“When I’m running, I draw a lot of strength from what I’ve overcome,” she says, just as she draws strength from her running accomplishments when she’s in a difficult place with depression.

And she’s such a powerful example that it is possible. Becoming both healthier physically and mentally has made Carol a much happier person. She’s not satisfied having finally completed a 100 miler. She says she wants to do more.