Home/RTCL Member Spotlight/How this runner is defying the odds, one step at a time
Previous Next

How this runner is defying the odds, one step at a time

Doctors said Seth Wilson wouldn’t be able to run past the age of 35.

He was born with a club foot that required seven breaks to align it and extend his Achilles tendon.

His left ankle is weaker than the right, and his left leg is shorter.

He has flat feet.

And yet, at 38 now, Seth is still running, and he’s determined to complete an ultramarathon before 40.

His goal when he started running wasn’t to prove the doctors wrong; Seth just wanted to better manage his weight. He’d made some friends who were runners and they insisted that Seth could do it, too.

He saw those friends accomplish remarkable things through running—winning races and losing more than 100 pounds. It made him wonder what he could accomplish.

When he started, Seth says he could barely run. “I couldn’t even run 20 seconds,” he recalls, but he did a Couch to 5K program that allowed him to slowly build up his stamina and running ability. It also helped him learn to love running.

Seth says when he finished the program, he just kept going. He raced a 10K and a half marathon (his goal was to finish under four hours; he did it in 3:59:59), but he also learned that races weren’t really his thing. Instead, Seth likes chasing mileage goals.

“If I don’t have a goal, I won’t get it done,” Seth says. “Getting a certain mileage per month gets me out there.” He completed an 80-mile month in November and is targeting 90-100 miles in December.

Going for mileage also serves as a better goal for Seth than targeting pace. “I feel so embarrassed sometimes about my pace,” he says, but he also tries not to compare himself to others. The fact that Seth is running, defying the odds, is far more important than how fast goes. 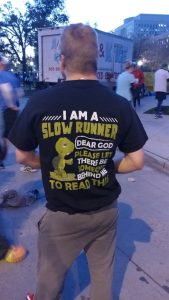 “Honestly, running…it’s not a competition with anyone other than yourself. The goal is to do something you think is impossible, but you can do it one step at a time.” Seth isn’t just showing himself that it’s possible, though. He’s also running for his son.

Like Seth, his son was born with club feet and a genetic disorder called DiGeorge Syndrome, or 22Q deletion syndrome because the 22nd chromosome is missing. This can affect a number of different body systems, causing heart conditions, a cleft palate (Seth was born with a submucous cleft palate), poor immune system functioning, and more. Seth’s son is also missing a kidney.

But despite physical limitations, Seth says, “My son wants to come out for runs with me now.” That keeps Seth running. “I really want to show my kid that I can run even though doctors said I probably shouldn’t.”

His wife, Michelle, has also supported him throughout his running journey, making it possible for him to balance his mileage, parenting responsibilities, and work. 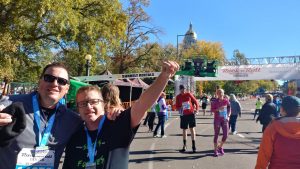 He also stays consistent with his running now because it helps him clear his head and escape the stress of the night—Seth works the graveyard shift, so he runs in the morning before he goes to bed.

“It’s nice to have a chance to disconnect,” he says. He keeps his running clothes and shoes in his car so he can run after work, but before he goes home.

Seth is routinely running 10 miles at a time now, and his longest run to-date was 16 miles. He’s finding that he loves being outside for longer and longer amounts of time, which is what got him thinking that he’d like to do an ultra-distance race.

“I want to skip the marathon distance and just go to ultra-distance,” Seth says, and he wants to tackle the Dirty 30 before he turns 40.

So he’ll keep running, even when circumstance tells him he can’t. And Seth would tell anyone else who thinks that they can’t run to just take it slow and do it in smalls steps.

He advises, “Some days are good and some days are bad—just go how you feel.” Fortunately, Seth says that running has him feeling good.